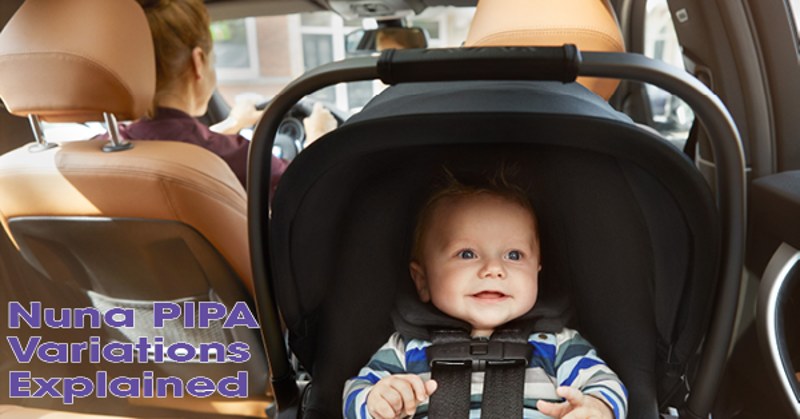 We think the infant carseat is one of the most important purchases you will make during your first year of child rearing.  We have discussed carseats in general here: “Straight Talk about Carseats”.

The stunning Nuna Pipa infant carseat has become the infant carrier carseat of choice throughout the United States in the last few years and there are actually now three different versions of this car seat. For many consumers the differences are confusing, so we want to help by explaining the three seats and their independent features.

The Nuna Pipa Infant Car Seat was released a few years ago and was a revolutionary piece of safety equipment because it combined several safety features found on other products into this single seat.  This essentially created one of the safest seats on the market. Specifically, the Nuna Pipa incorporated both a rigid latch installation with a load leg (both of which were not in widespread use) into a single seat; blowing away the competition. By adding additional features like the Okeo-Tex textiles (for a certified clean fabric component), the ‘Dream Drape’, and out of the box compatibility with a range of strollers the original launch of The Nuna Pipa was a revolution.

We have detailed the launch of this seat with our review, “New PIPA Lite by Nuna - the 5 pound wonder!”. The major take away on this product versus the Nuna Pipa is that the weight of the carrier has been reduced a whopping 2 pounds without sacrificing the safety or aesthetically pleasing nature of the seat. Additionally a complete second seat liner in an GOTS certified organic cotton is included with this seat.

The one caveat to mention is that the standout cost to this innovation was the removal of the seatbelt pathway on the carrier portion of the seat. On the Pipa (original) there is a belt path on the carrier allowing the car seat to be installed without the base for emergency situations and for use in public transportation (Uber, Cabs, airplanes, etc) so you do not have to carry the heavy carseat base with you. For most families this is a non-issue because they are not utilizing public transportation on a regular or occasional basis (or plan not to during the first year of this new baby’s life). If, in fact, you utilize public transport on a regular basis it might not be the right fit seat for you.

Lastly, noticeably absent on the Pipa Lite is the presence of the Dream Drape that so many families love for the breathable sun protection.  We recommend these breathable muslin magnetic closure car-seat canopies from Little Unicorn as a replacement for the ‘Dream-Drape-less’ Pipa Lite.

The last and most fantastic of the three versions is called LX (for Lux). This overall function and construction of the seat is the same as the Pipa Lite (rigid latch, load leg, 5 pound carrier) However there are two distinct additions to provide that LUX moniker. First, the DREAM DRAPE makes it’s reappearance adding that coveted built-in canopy extension, beloved by most consumers. Second, and more important to many people, is the use of Merino Wool as the seat fabric. Wool is naturally cooling in warm weather and provides some warmth in those cool months. Wool is also one of the few natural fibers that boasts an inherent flame retardant property.

How do I choose which Nuna Pipa is right for my family?

We have a series of questions that can help: